What can I do during my holiday in Cilento?

Is it your first time in this wonderful area?

Are you curious to explore but do not know where to start?

Here there are some ideas to start your journey with an ideal map of the places you should absolutely visit and those you should not miss if you have extra time.

May I remind you that you can ask any time for further information at our reception desk: there will be always someone to help you.

Let’s start with… an introductory view of Cilento!

First of all, Cilento is a very old land, its roots date back to the Stone Age and the places of this area are rich in traditions and culture.

The name Cilento seems to come from Latin Cis- Alentum, which means “on this side of the river Alento” (i.e. located on the east side of the river) specifying the geographical position of the area.

Cilento, with its wonderful National Park, is a UNESCO World Heritage Site.

Greek and Roman myths and legends abound, such as the story of Ulysses and the mermaids or that of Aenea’s helmsman, Palinuro.

Here there are some of the locations of this rich and wonderful land: 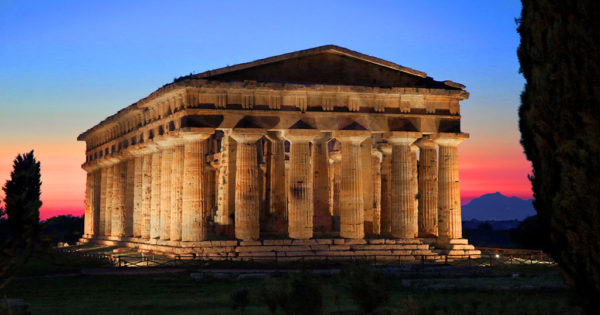 This city was occupied since the Stone Age and today is one of the Italy’s most famous archaeological sites located only 30 km away from Baia Marticana.

The Greek Temples of this site (Temple of Hera or the Temple of Athena) are the best preserved in the world and are among the most important ones but the story of Poseidonia (the old name of the village) is too long the be told in just one website. 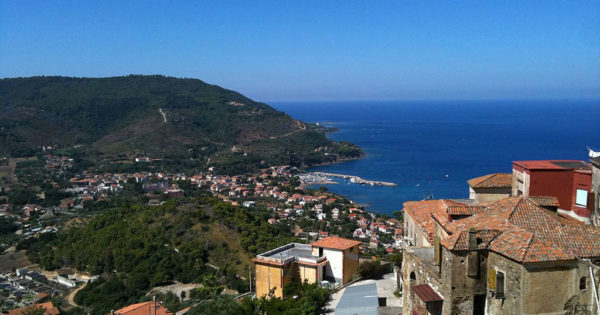 The medieval hamlet of Castellabate

Castellabate is also part of UNESCO World Heritage and is located on the top of a hill.

The hamlet was a stronghold against the Saracens and has a breathtaking view down to the beautiful coastal panorama including the Gulf of Salerno. Most of the hamlet’s fame is due to the film Benvenuti al Sud (Welcome to the South).

Near Castellabate you can find Cape Licosa, one of the most interesting islands from the mythological point of view.

In fact, it seems to be the place where Odysseus, approaching the land of the sirens, has his men bind him to the mast of the ship in order not to be tempted by the sea monsters. 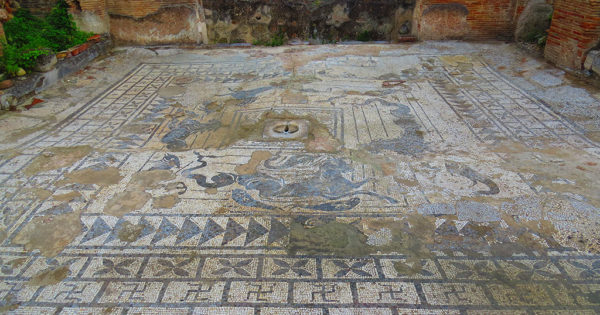 Elea was a city part of Magna Graecia and the place where the philosophy school of Parmenides was established. Remarkable are today the remains of Porta Rosa, the amphitheatre and a Greek Temple which dates back to the 5th century B.C. on which stands the medieval tower of San Severino. 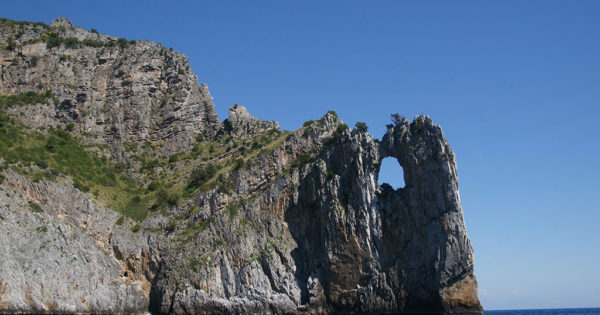 It is here that Virgil, in the Aeneid, tells of Palinuro , Aeneas’ helmsman, who was lulled asleep off the coast of Cilento, felt in the water during a violent storm and then was savagely killed by the locals. The offended Gods of the Underworld punished the locals with the plague.

Another historical episode that involves this area dates back to 253 B.C., during the Roman Empire, when the Roman Navy was surprised and destroyed by a storm off the coast of Cape Palinuro.

The rock cliffs of Cape Palinuro decline below the sea level up to 50 mt. Some of these caves are among the most beautiful in Italy: the Ribalto, the cave of Buon Dormire and especially the Azzurra cave (Blue Cave), only accessible by sea. The cave is called Azzurra (blue) because of spectacular games of light on the water, which are very impressive at midday and during the sunset, due to the sun enlightening the cliffs and the stalactites. 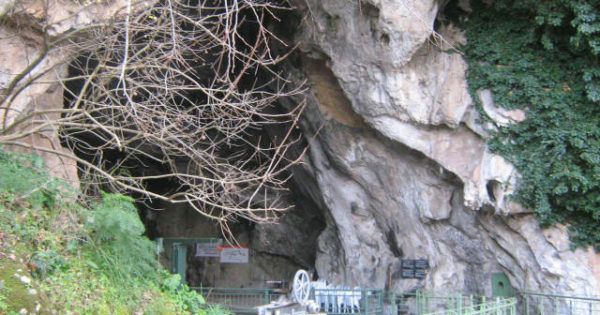 From Baia Marticana the caves of Pertosa and Castelcivita are also easily reached. With their mile long sequences of galleries, huge halls and atriums, these caves create a very suggestive atmosphere thanks to the water reflecting on different minerals, stalactites and stalagmites.

If history and archaeology have not satisfied your hunger for knowledge after visiting Paestum and Velia, you also have the chance to visit the wonderful archaeological Excavations of Pompeii and Herculaneum (just 90 minutes away). 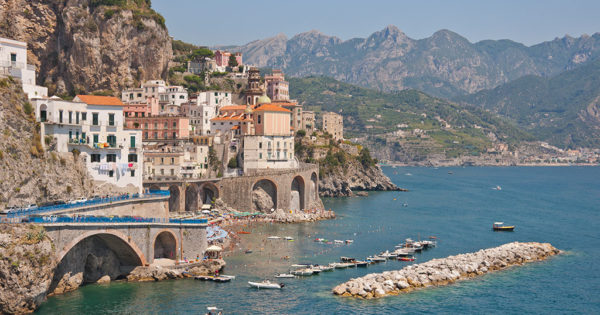 In just over an hour drive from our hotel you can reach the Amalfi Coast with its beautiful cities, such as Amalfi, Positano and Ravello.

Do you dream of boarding the ferry for Capri?

During the summer the Metro del Mare network operates from many ports of Cilento, such as the one in San Marco di Castellabate which is only 10 minutes’ drive from Baia Marticana Residence – Hotel.

Do you prefer the calm and the charm of the hinterland?

Then you should absolutely visit the hamlet of Rocca Cilento and its remarkable castle or Roscigno Vecchia, the “ghost town”, an extraordinarily preserved 19th century village completely abandoned by its population in the early 20th century.

Not very far from Roscigno there is also one of the largest and most famous Carthusian Monastery of Italy: the Certosa di Padula. Also known as Certosa di San Lorenzo, it dates back to the 14th century and is a UNESCO World Heritage Site since 1998.

Places you should not miss (if possible)

Here there are some excursions and itineraries to discover less known, but still very picturesque, places of the area, organised by our corporate partners (and they can also arrange trips to other famous places such as Paestum and Cape Palinuro). 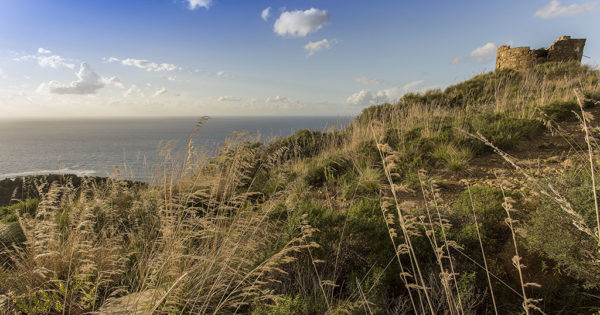 Montecorice originated as a small village around the monastery of Sant’Arcangelo, which dates back to the 10th century. The hamlet is rich in history, traditions and culture. Among the places to visit there are the Madonna delle Grazie chapel with its windmill and the 16th century Church of San Biagio.

The hamlet of Ortodonico preserved all its old architectural features. A Museum of Peasant Civilization has been created out of an old olive-oil mill to show locals daily life through their tool and survival means.

The area also have important palaces, such as Palazzo Marchesale or Palazzo Genoino with its beautiful 16th century tower.

Montecorice is really worth the visit. 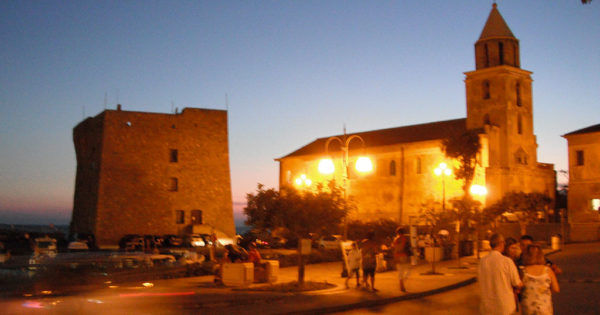 Acciaroli owes its success to Ernest Hemingway who visited the hamlet which inspired Hemingway’s best novel, The Old Man and the Sea. There is a unique atmosphere in this hamlet thanks to its alleys, the 12th century Church of the Annunziata, the remains of an ancient Angioine defense tower and the little shops behind the port. 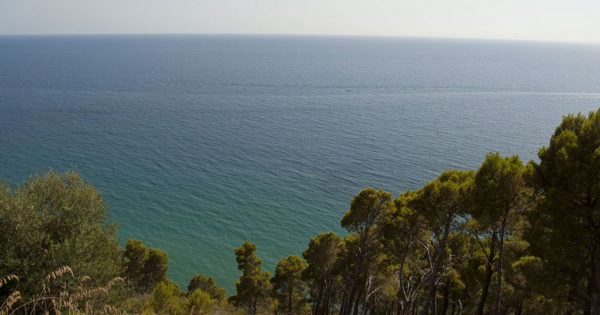 Ripe Rosse is part of the municipality of Montecorice, where the blue sea of Cilento contrasts with the green Mediterranean vegetation created by the Aleppo pines. This is a wide naturalistic area in the heart of Cilento National Park.

You will have certainly plenty of other things to see, explore, and fall in love with, in Cilento.

Wine tasting, local dishes, natural areas of Cilento National Park, Greek Theaters and museums or medieval castles are just an example. There is no lack of excursions, trips and new places to visit.

You can ask any time for further information at our reception desk where you will find experienced staff who will give you all the information you may need. At Baia Marticana you will also find Gino, the legendary owner of the hotel who likes welcoming our new guests giving them information, hints and fun facts about Cilento. He is a kind of local historian of our residence.

The marticana is a particular boat, a merchant ship very popular in the 18th century during the Kingdom of the Two Sicilies.

Our logo depicts a marticana with a specific shape called here scoglio della Marticana (rock of the Marticana). This rock is located below the promontory Ripe Rosse, just few minutes away from our beach, and can only be reached by sea.

The myth (of uncertain origins) dates back to the insurrection of 1857 known as the “Sapri expedition” led by Carlo Pisacane. The insurrection against the House of Bourbon was supported also by some boats including a marticana. The boat, sailed by some rebels, was surprised by a storm and sank near the rock which is today named after it.

If you love the clear and crystalline seabeds and especially if waking up by the sea is all you dream of, our private beach is the right thing for you.

What can I do during my holiday in Cilento?

How to reach us
Condividi:
-